On May 15th, 2015 Friedrich Ebert Stiftung (FES) in close collaboration with the Unit of Communication and Research (UCR), attached to the Prime Minister Office, we organized the first series of the cycle of reflections “The unbearable lightness of word!” focused on the theme: “Do you speak European?” Challenges of public discourse in Albania! The event took place in the premises of Faculty of Social Sciences in Tirana. 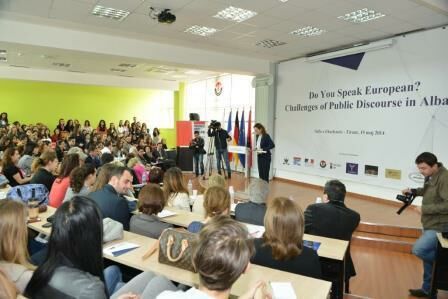 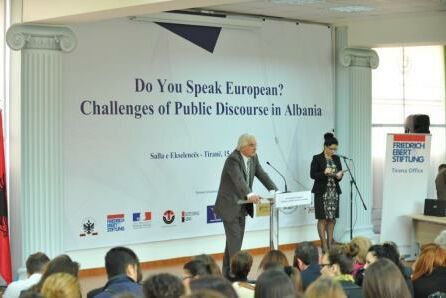 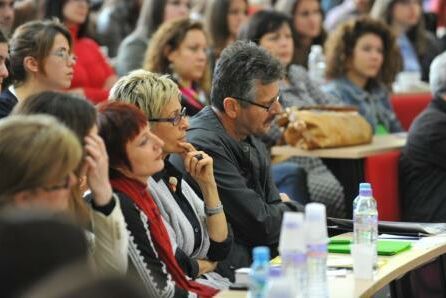 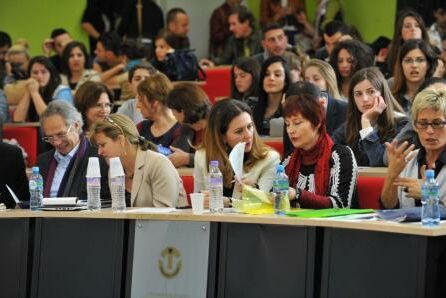 The conference was welcomed by the His Excellency, ambassador of the Federal Republic of Germany, Mr. Hellmut Hoffmann and the ambassador of Republic of France, Mrs. Christine Moro as representatives of two important European countries as creators, establishers and supporters of the European Union.

The Albanian personalities, who were invited to share their thesis on the European identity and the Albanian public discourse on Europe and Europeanization, were very much welcomed with their ideas by the audience which was in a large number due to the high intellectual interest towards their point of views. The speakers of the conference and Mrs. Anne-Marie Thiesse, author of “L’identite europeenne en questions” gave the audience enough intellectual space to reflect and discuss and the same was done through the following authors and thesis:

Elvira Dones: "The cultural relation and the dialogue between the authors of diaspora and Albania nowadays”.

Bashkim Shehu: "Past present continuous: the shadows of the past in the public discourse."

Luan Rama: “Political discourse and contemporary nationalism: the Europeanization of Balkans and the Balkanization of Europe?”

The first cycle of reflections will be followed by a booklet which will include all the thesis that are mentioned above with the purpose to reach a larger number of interested people. A Face Book account is opened with the logic of creating a virtual platform of public discourse with the authors but also with all the interested persons. A live TV transmission was done at A1 Report, show “Urbanika”