Democracy, trade unionism, sustainable development, political communication, and inequality in society were all topics under discussion during Friedrich-Ebert-Stiftung's annual Academy on Social Democracy 2021. The 6th edition of this event took place from 12-23 May 2021. 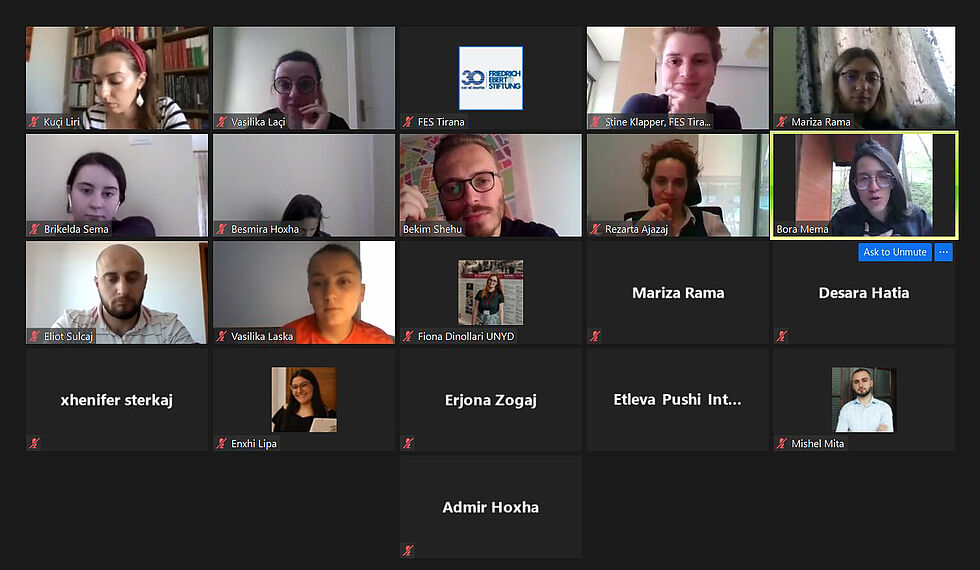 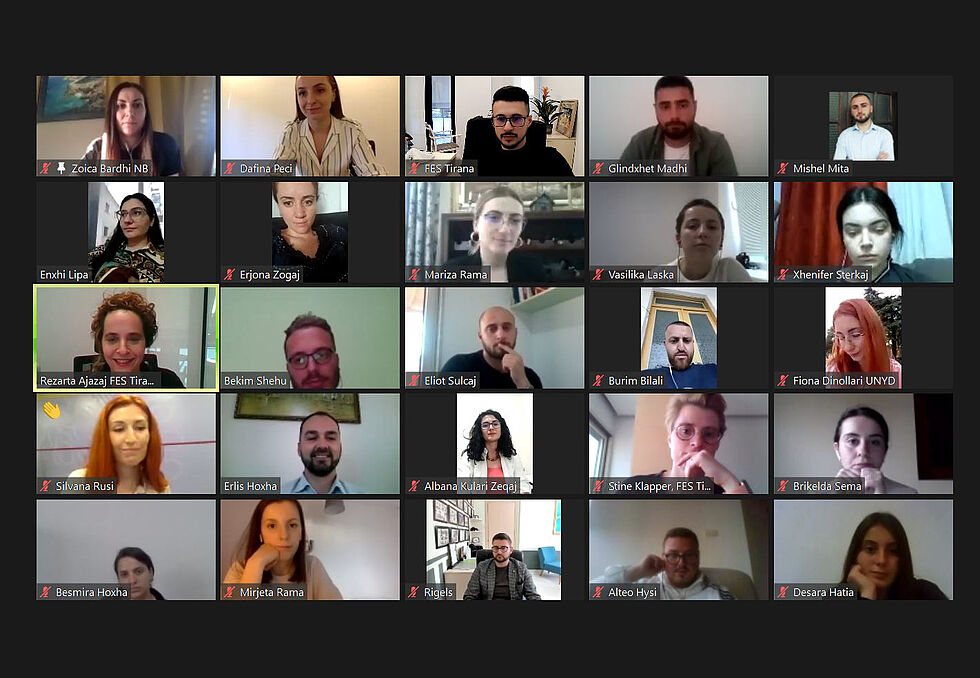 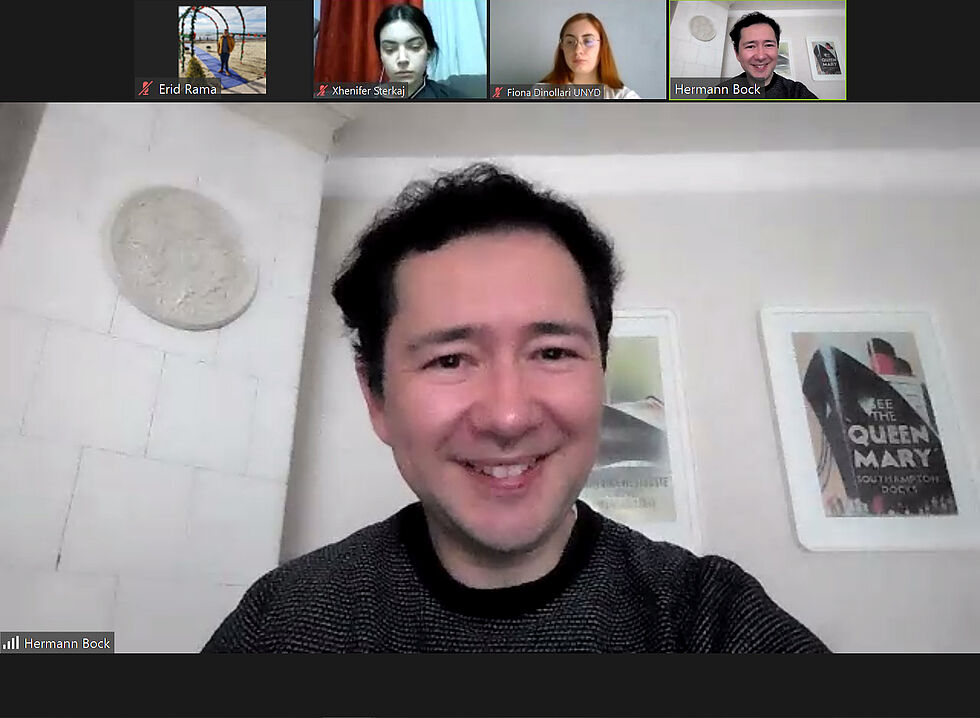 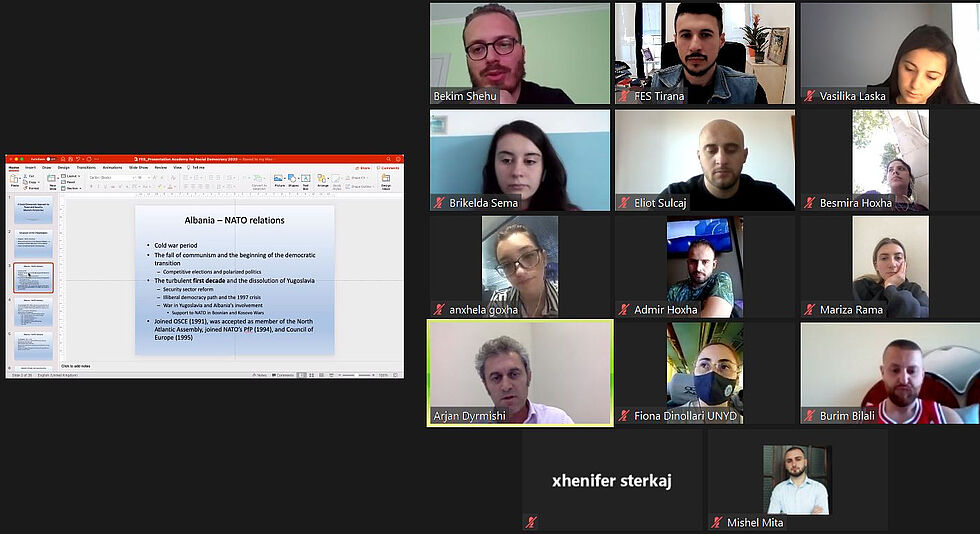 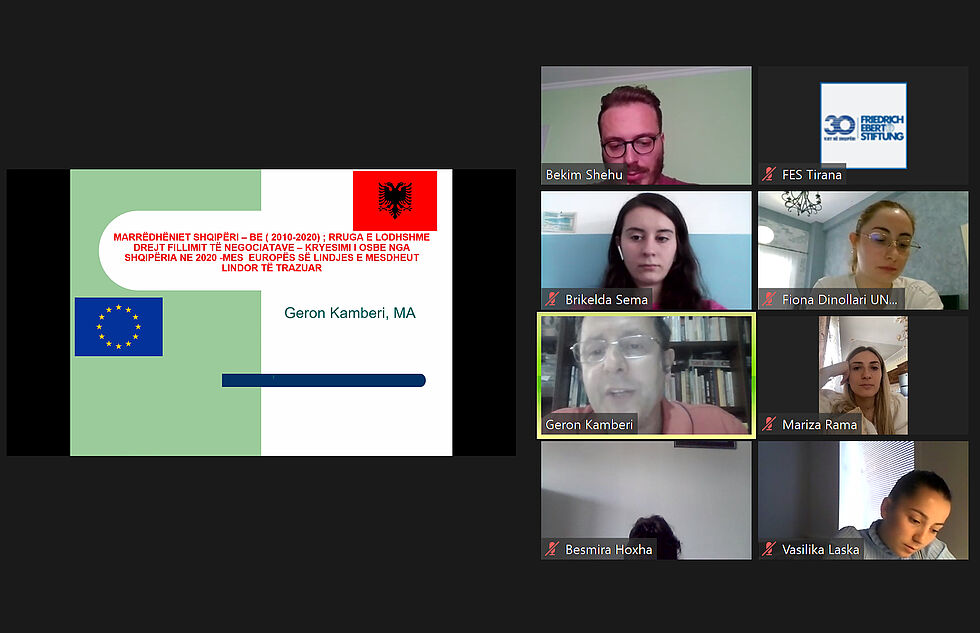 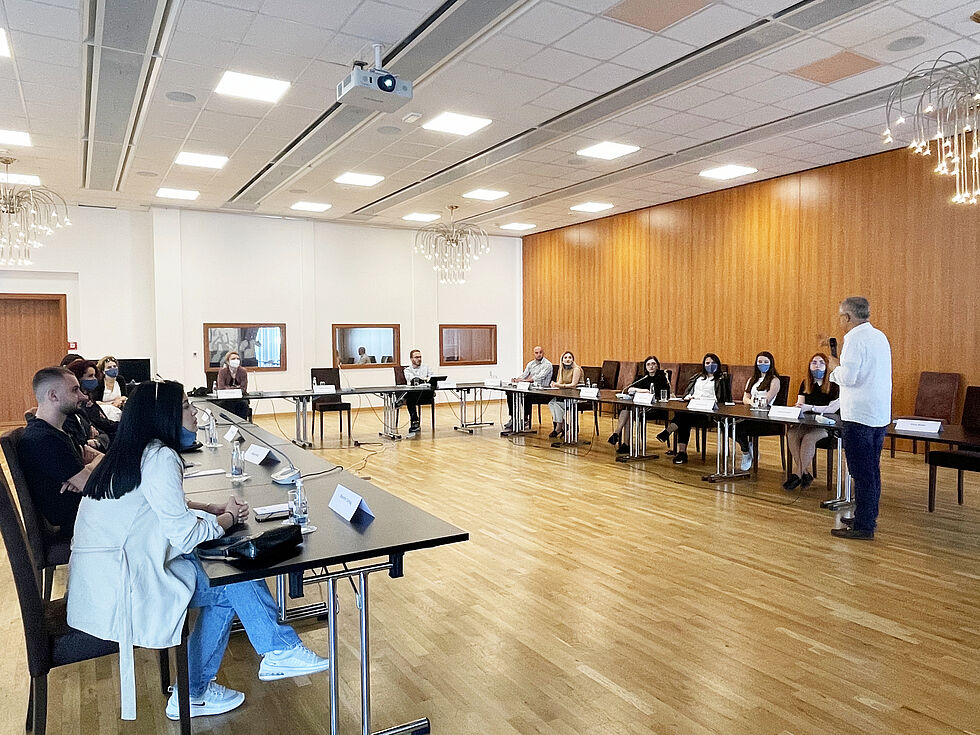 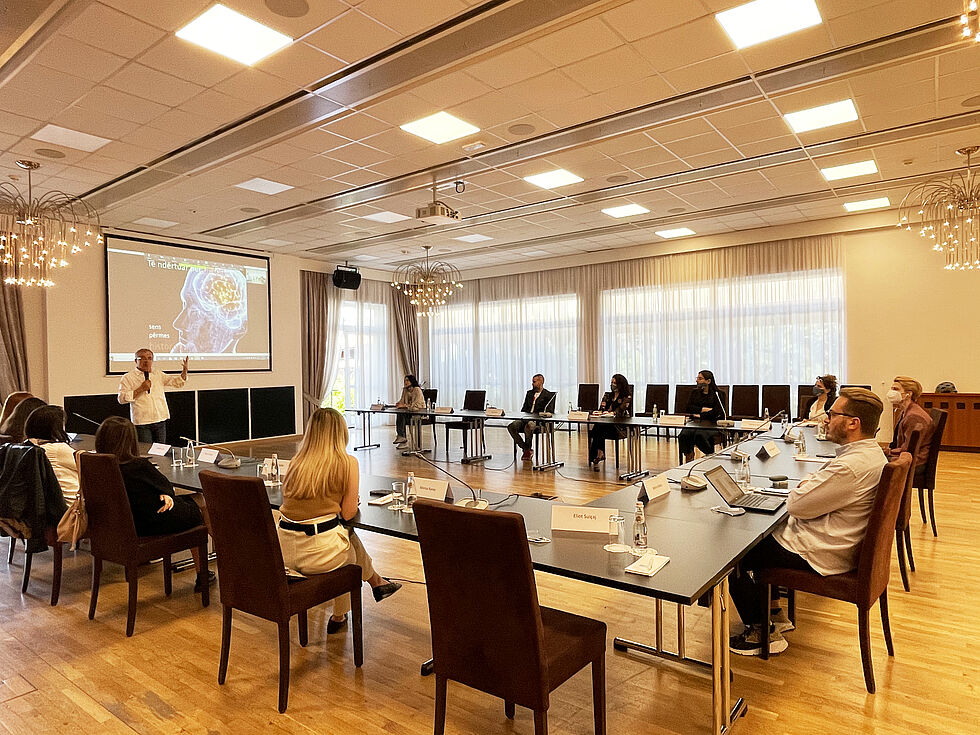 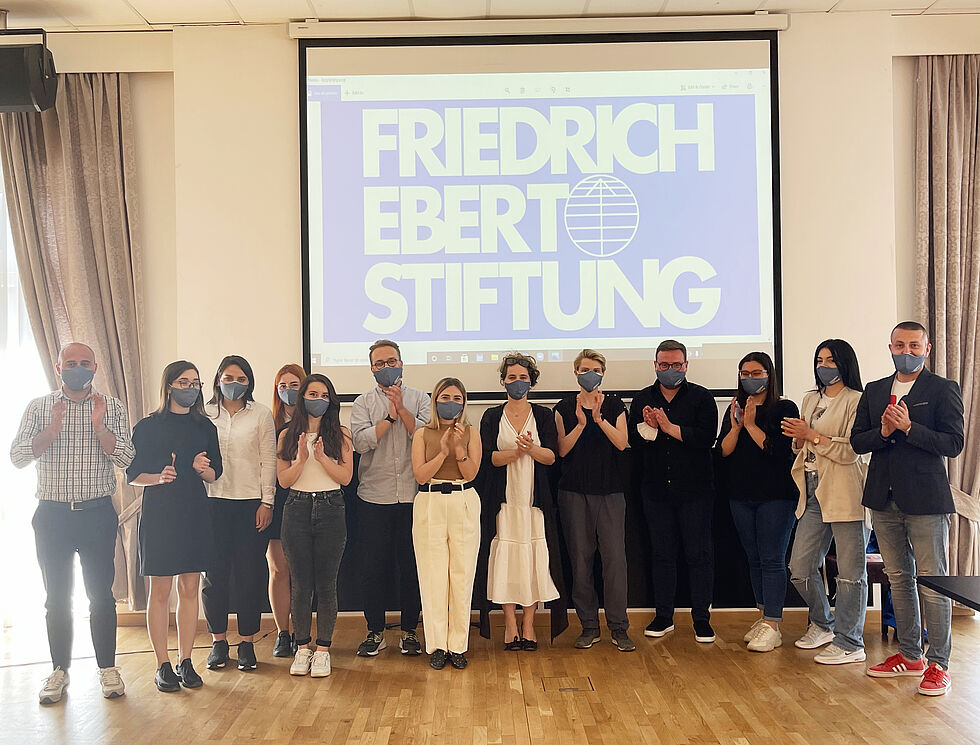 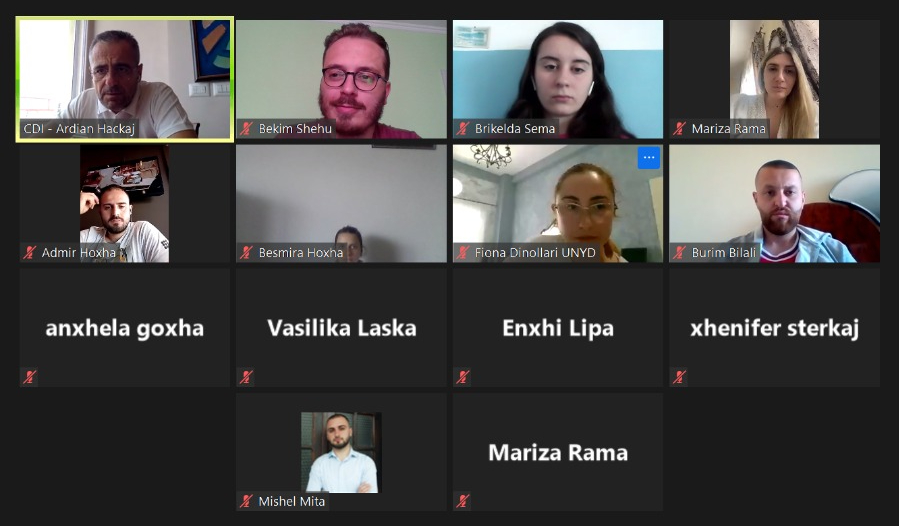 Eighteen young people from Albania, of diverse backgrounds and experience, were selected to contribute their thoughts and ideas during a series of lectures and panel discussions led by academics, activists, civil society leaders, and journalists. Participants had the opportunity to listen and discuss social democracy topics on an international and national level. Speakers from Germany and Albania provided participants with information on the basic principles of social democracy accompanied by models and best practices in an Albanian context. Due to the constraints caused by the global pandemic, most of the activities took place online on the ZOOM platform.

Inspiring young people to become active citizens and to participate in the democratic process was the key theme of the first day of the academy. FES presented testimonies from young people in Albania who have benefited from participating in previous programs and initiatives and have gone on to promote the principles of social democracy in their respective fields, varying from civil society to policymaking. Ms. Yvonne Lehman, Referent for Youth and Politics at FES Berlin, continued the theme of youth activism by providing an overview of youth movements in Germany and the causes they are pushing forward.
Participants were then introduced to the basic values of social democracy and how they are embodied in politics and political activities in a presentation by Mr. Hermann Bock, Seminar Leader at the Academy for Social Democracy in Berlin.

After receiving a comprehensive and informative overview of the concepts of social democracy, participants were then shown how these are applied in an Albanian context. Prof Afrim Krasniqi analysed the level of democracy in Albania and the political offers of national parties in his presentation. This was followed by an exploration of definitions of inequality and a discussion on social justice issues led by Dr. Endrit Shabani. The day ended with two discussion panels. The first focused on social democratic policies in Albania, with Dr. Endrit Shabani, Mr. Etjen Xhafaj, and Mr. Arbër Zaimi as its panelists. In the second panel, Mr. Koloreto Cukali and Ms. Stine Klapper discussed the values ​of transparency and the impact of specific situations, such as the pandemic, on media freedom and civic participation.

The first weekend of the academy was dedicated to issues of sustainable development, trade unions, and gender equality in Albania and beyond. Prof Adrian Civicin began Saturday's session by examining historical economic models, industrial revolutions, and the challenges faced when designing policies throughout the centuries up to the modern-day and the Fourth Industrial Revolution: Digitalization.
Analysis of economic policies gave way to an exploration of sustainable development and how protecting our environment can benefit society and the economy. Sonja Schirmbeck, an expert from FES Berlin, spoke of the socio-ecological changes our planet is currently experiencing as a result of climate change.

This was followed by a discussion panel on fair and sustainable urban development, attended by Mr. Joni Baboçi from the Municipality of Tirana, Ms. Rea Nepravishta from WWF Adria, and Ms. Erisa Nesimi from GIZ. Sustainable urban development presents challenges as well as great opportunities for Albania, according to Mr. Baboçi. He mentioned analysing the construction industry and the application of eco-friendly initiatives, such as bicycle lanes. Ms. Nesimi emphasised GIZ's support for initiatives, such as bicycle lanes, as a good example of the changes needed to achieve sustainable and environmentally friendly development. Ms. Nepravishta stressed the need for public pressure on governing institutions to preserve natural resources from abusive and unsustainable business models, which can cause irreparable damage to local communities where they are being implemented

Trade unionism was the topic under the microscope on the Academy's Sunday opening session. Dr. Sebastian Voigt gave a presentation on the history of trade union movements in Germany and the social and political transformations they have gone through, reaching today's Fourth Industrial Revolution period. The discussion continued with a closer look at Albanian trade unionism. Ms. Hyqmete Daja and Renato Mucaj described the history of this movement in Albania and gave an overview of the current situation.

Following on from workers' rights, the discourse turned to feminism and its role worldwide as well in Albania. The participants learned about the history of feminist movements throughout the world from Ms. Vasilika Laçi, a human rights activist. Her presentation was followed by a panel discussion on the same topic but tailored to the specifics of Albania. The panel consisted of Vasilika Laçi, Bora Mema, an activist of the Political Organization, and Liri Kuçi from Shota.al. Ms. Mema said that field activism has made feminist activism more vulnerable for many societal groups, for which progress is very slow and minimal. Ms. Kuçi spoke about the impact of the patriarchy and the institutional oppression it has created, rendering women insecure in the family and public educational institutions. Ms. Laçi stated that in Albania there have been several different forms of historical waves of feminism which "fight" in parallel and, to achieve substantial victory, a union of all these progressive forces is needed.

The second weekend of the Academy, on 21 - 23 May saw the conversation turn to issues of security, the state of social welfare, and political communication. Ms. Nicole Renvert, Associate Partner at the American Institute for Contemporary German Studies and security issues expert, provided participants with information on some of the current challenges to security and peace in the world. Ms. Renvert continued to analyse how peace and stability can be ensured by exploring the security concepts upon which policies and initiatives of different states are built. The discussion then focused on the region, as the Director of the Centre for the Study of Democracy and Governance, Mr. Arjan Dyrmishi, outlined a panorama of the security situation for the Albanian regions and the measures taken in the framework of Euro-Atlantic integration.

Social reforms, social welfare systems, and the steps taken to adopt these policies to the European model of the welfare state were the next focus of the Academy. Prof Merita Xhurami, Lecturer of Social Policies at the University of Tirana explained the constituent categories of social policies and the history of social reforms in Albania as well as their orientation towards Albania's integration into the European Union. The next guest, Mr. Ardian Haçkaj, Director of Research at the Institute for Cooperation and Development, described some of the challenges Albania is facing in the framework of European integration illustrated by the fable of the "Catch 22" dilemma. Mr. Haçkaj also examined the current integration processes in which Albania is engaged. These processes were also addressed in the follow-up presentation by Mr. Geron Kamberi, an expert on EU integration issues. Mr. Kamberi relayed the journey made by Albania towards the European dream and some of the key processes that the country has either benefited from or is incentivised by.

Political communication and how it is handled by traditional and digital media in Albania, of great relevance and worthy of examination following the recent general election, was the the final day's topic.  Mr. Neritan Sejamini, Editor-in-Chief of Exit.al, opened with his presentation on the principles of political communication and some success stories in an American and Albanian context. His presentation was followed by that of Mr. Bekim Shehu, a Communication and Public Relations expert, who addressed those principles in the digital context. He explored the challenges and risks faced by the public and the implications they can have for the community and on electoral behaviour. Journalist Alteoi Hysi was the next guest who addressed the different approaches of political communication by traditional media, also involving the participants in an exercise to create electoral messages.

This day marked the end of the 6th edition of the Academy on Social Democracy, where the closing words were those of Ms. Stine Klapper, Director of the Friedrich Ebert Foundation, Tirana. Ms. Klapper invited all participants to apply the knowledge and practices gained at this Academy in their personal and professional daily lives. She also asked the participants to further develop their engagement with the Foundation, inviting them to future activities and initiatives.