On 23. June 2020, Friedrich Ebert Stiftung Tirana and Skopje Office together with FES Mittel- und Osteuropa organized the online discussion “Gala Without Guests: What Does the Start of EU-Accession Talks Mean for Albania and North Macedonia?” 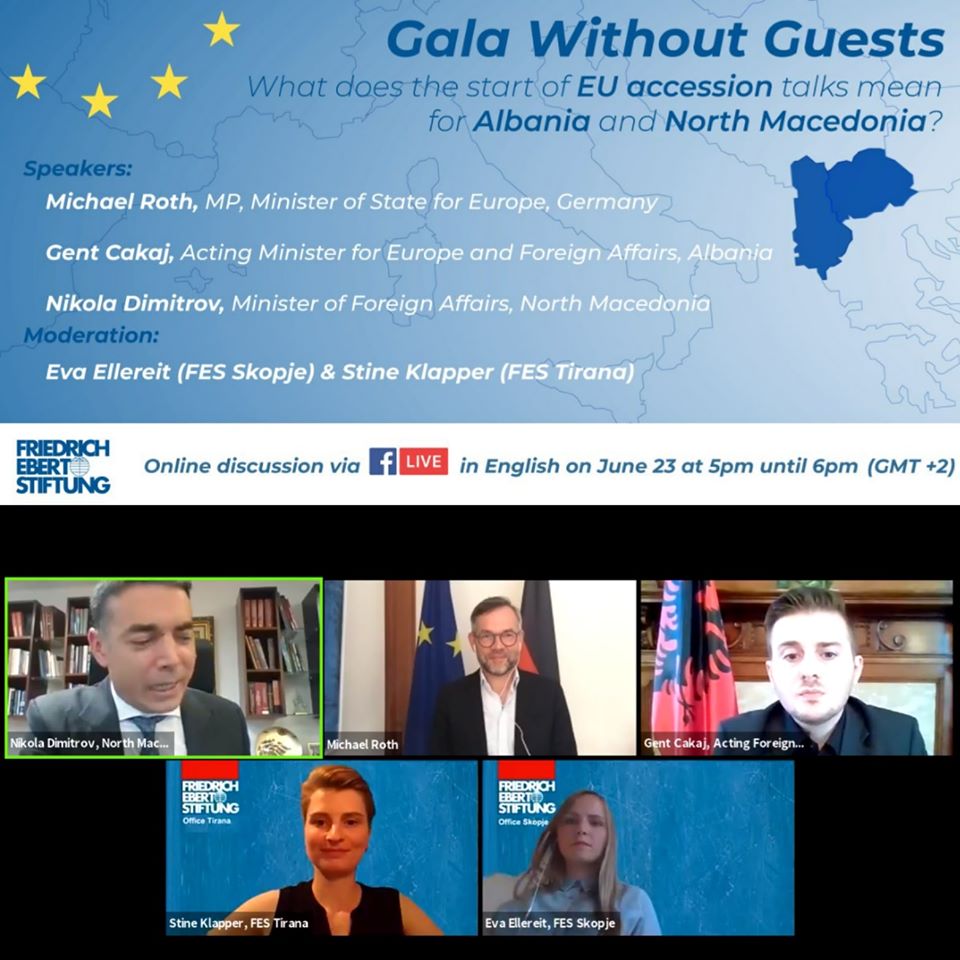 In this event were invited Michael Roth,Minister of State for Europe from Germany, Gent Cakaj, Acting Minister for Europe and Foreign Affairs from Albania and Nikola Dimitrov, Minister of Foreign Affairs from North Macedonia with the moderation of Stine Klapper Director of FES Tirana and Eva Ellereit Director of FES Skopje. In this online discussion were invited decision makers from both countries as well as the EU, civil society representatives, media representatives, trade unions and academia.

The relevance of the decision for the two countries, the next steps ahead as well as the role of the EU during the German presidency of the Council was debated. After years in the seemingly closed waiting room, the European Union (EU) has opened the door for Albania and North Macedonia. Despite numerous rejections and delays the European Council gave green light to start accession talks in its session in March 2020. This had been longingly waited for in Skopje and Tirana. But curfews and travel restrictions obstructed the bigger celebrations. In times of the fight against the Corona pandemic the news from Brussels did not catch attention for long. Still, the opening of accession talks remains crucial – not only for the two countries, but also for the EU and its political goals in the Western Balkans. Talks with North Macedonia could already commence in June, elections are being prepared in Skopje. In Albania, the decision can also foster significant change, but a catalogue of preconditions to start negotiations needs to be fulfilled beforehand. The Friedrich-Ebert-Stiftung had with this event the main goal to shed light on these important developments – especially because of the Corona pandemic – and discuss the political effects.

Stine Klapper the Director of FES Tirana emphasized that due to the pandemic there was little discussion about the green light for Albania and North Macedonia for the opening of the accession talks. She stressed the fact that this development was very important and deserved much more attention both in the region of South East Europe but also in the European Union.

Michael Roth, Minister of State for Europe from Germany pointed out that the decision was the next logic necessary step in the path the EU walked together with the two countries. It was hard to agree and there were some obstacles to be solved and member states to be convinced. Domestic issues also played a role in some member states but that is part of how EU works. The important thing is that the enlargement process continues successfully  on the basis of the new methodology and the Zagreb summit declaration included 3.3 billion euros to cope with Corona Virus. This showed that despite skepticism of some member states there is consensus on the direction we are moving ahead. He also emphasized the fact the enlargement with remain a very important issues on the German Presidency.

Nikola Dimitrov, Minister of Foreign Affairs from North Macedonia mentioned that the big problem with the postponing of the opening of accession negotiation was that people stopped believing that this story was possible.On the other hand, the fact that the Council and EU during the hard times of Covid 19 found the commitment, energy, political will and time to deliver promises, we welcome this decision very much. It is our turn to show why the accession process is the best way possible to improve the life of the citizens and their concerns on justice, healthcare, education, market economy, ecology etc so they can have a European life at home and not leave the country.

Gent Cakaj, Acting Minister for Europe and Foreign Affairs from Albania stated that the decision was very positively waited from the politicians and the citizens. There is a growing political realism in Albania. Albanians are  aware that EU face different problems and structural issues within the EU. No one naively believes the EU membership will be granted soon. The process brings transformation for the countries like in previous the Easter countries. Despite the conditions for Albania, the decision was seen as a chance.

Eva Ellereit the Director of FES Skopje concluded that the enlargement process cannot be abstract but felt but the people and made tangible and concrete. All parts agree that this process if very important for Western Balkans and for the European Union. She also emphasized the fact that the healthcare and welfare  is very important and that all felt it.