EU Policy Hub is since April this year implementing a Project on "Communication of EU Membership Negotiations". 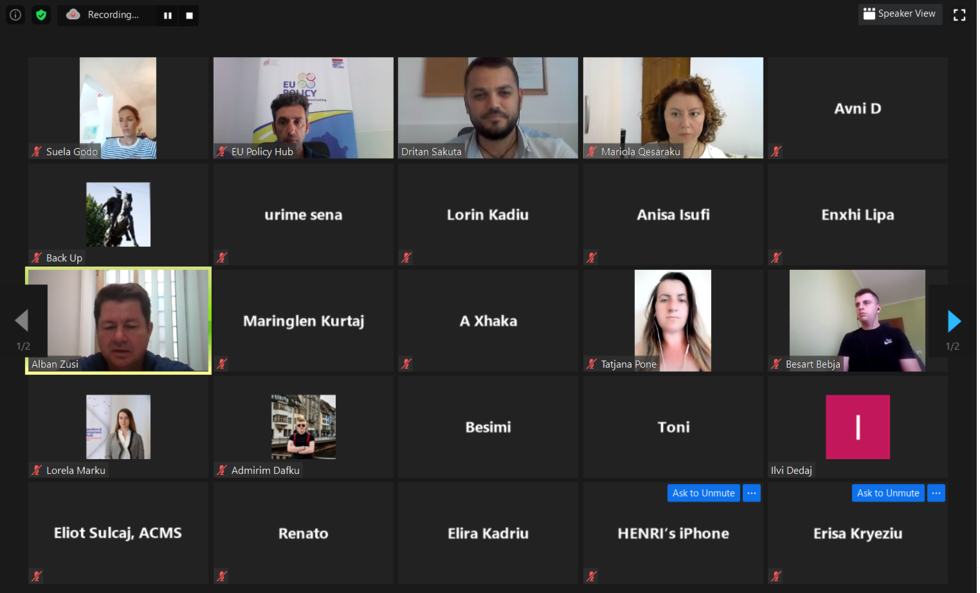 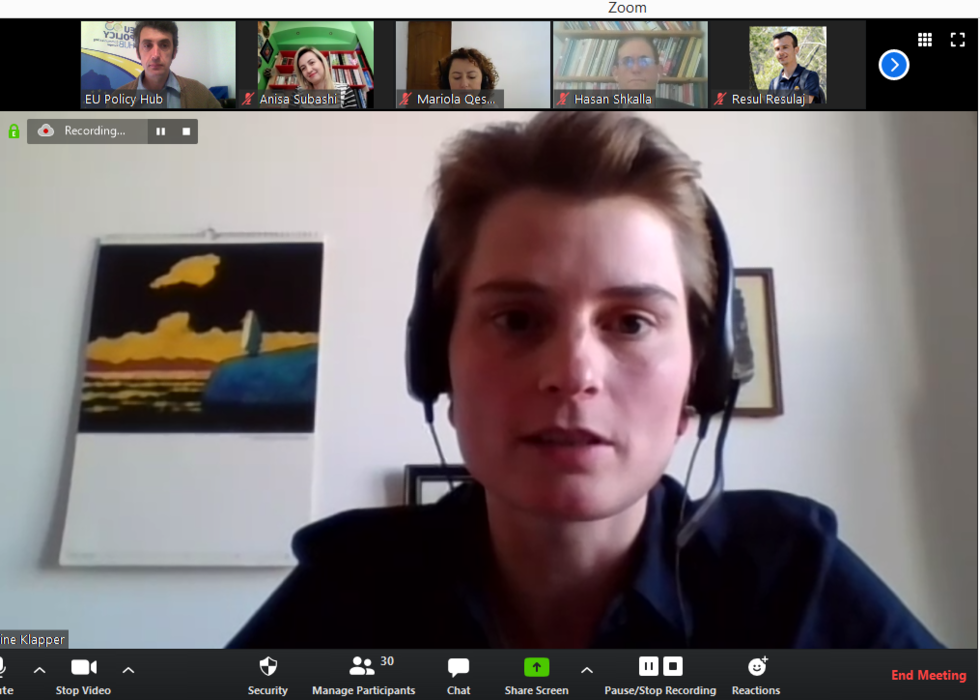 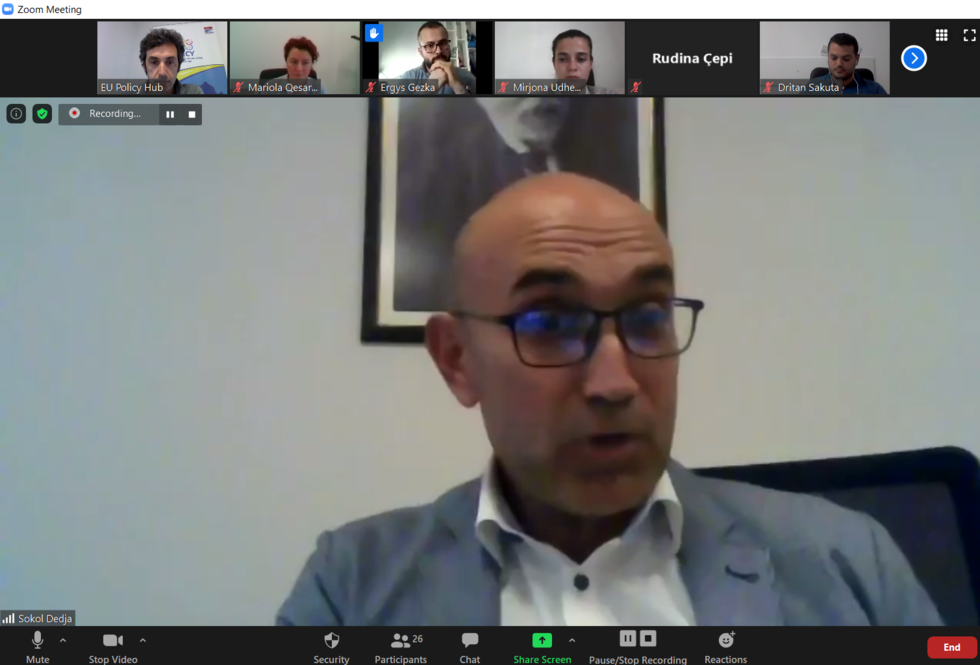 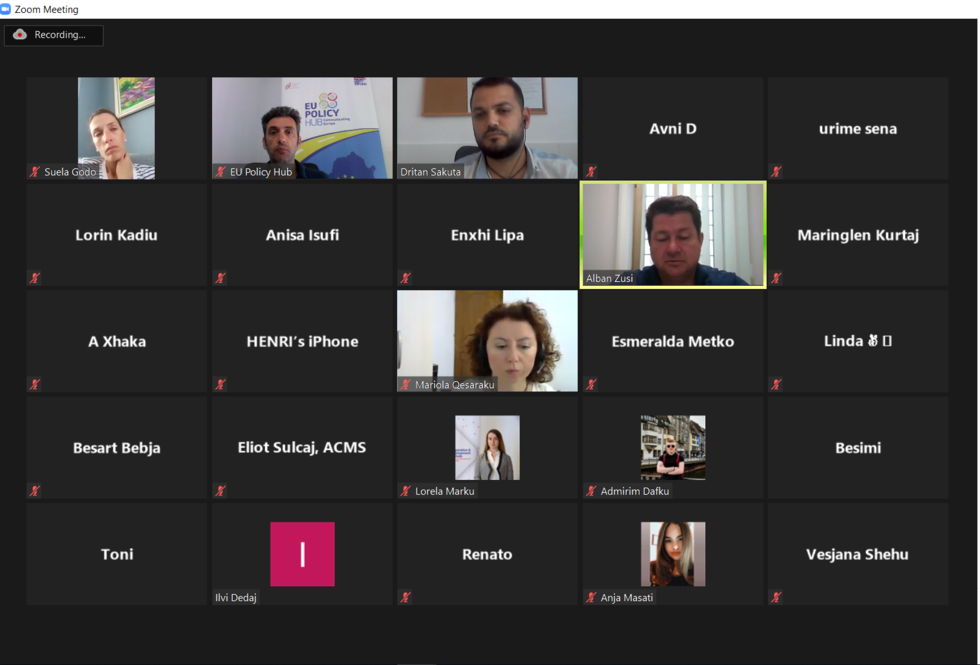 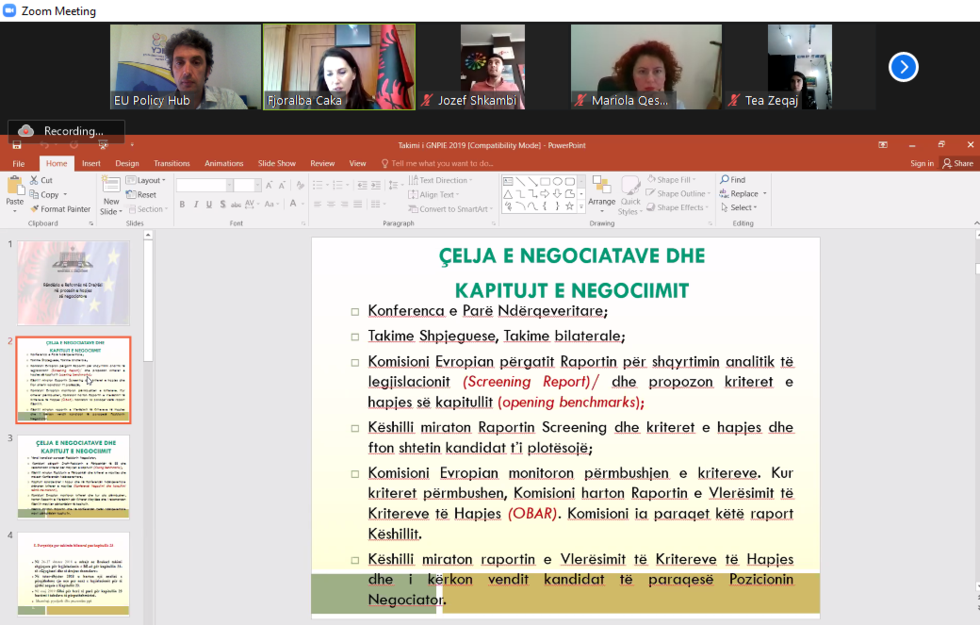 It is our opinion that this project was highly needed, because the COVID-19 outbreak and other political events took the attention away from opening of negotiations and because there is a risk that economic and political developments will affect the non-sufficient attention to this process in the future as well.

Friedrich Ebert Stiftung, Office in Tirana, in the framework of the support for integration processes decided to financially support us in this venture.

The project aims to keep the public fed with information for an 8-month period, hoping to foster the debate and communication beyond those who are the direct beneficiaries of this Project.

A series of ten webinars are planned to be organised via Zoom, encompassing professionals and representatives of institutions that have a voice and add meaning to the negotiation process. So far, we have developed only four such webinars.

In our first webinar, held on 7 May 2020, we invited the Director of Friedrich Ebert Foundation, the German Social Democrat, Stine Klapper, to talk about the "Social Dimension of Enlargement". Social solidarity, one of the basic principles of social democracy, was part of the comparative presentation of these principles in Germany under the influence of the EU and how it looks like under the lens of observation of the Albanian reality from the point of view of a non-Albanian political observer. The implications of the pandemic and its challenges for people and institutions, including civil society, were topics where discussions were mainly focused.

Our second webinar, entitled "The Importance of Justice Reform for the EU negotiations" was held on 28 May 2020, and was organised with the participation of Ms. Fjoralba Caka, Deputy Minister of Justice, well acquainted with the integration processes, as well as part of the Albanian teams engaged both with the implementation of the Stabilization and Association Agreement and with the newly established negotiation teams. Ms. Caka made a presentation of the process, the dynamics that may accompany it, as well as the difficulties that will need to be addressed before we see other developments. Discussions with Ms. Caka focused on the issues of justice reform, developments in the approximation of legislation and the negotiating structure, as well as the role of civil society, etc.

Mr. Sokol Dedja, Deputy Minister of Foreign Affairs, was invited to our third webinar, held on 11 June 2020, dedicated to "Negotiations, Problems and the Albanian approach", aimed to address the "opening of negotiations" from different perspectives and deepen the local, regional and European processes that will have an impact on the negotiations. The discussion with Mr. Dedja focused on the relationship established for the process between state institutions and civil society, as well as the negotiation dynamics and expectations.

The keynote speaker of the fourth webinar, entitled "Challenges of the Albanian Manufacturing Industries during the Integration Process", held on 2 July, 2020, was Mr. Alban Zusi, President of the Albanian Association of Food Industrialists, who brought another perspective in our discussions. Mr. Zusi presented the problems faced by Albanian manufacturers, both in achieving the standards required by the EU vis-à-vis certain products, and in the expected impact -- that of further inclusion of the Albanian market in the European market, the steps to be taken by the Albanian industry and the Albanian State to facilitate more competitiveness of the Albanian economy in the context of integration developments.

All conversations received attention and featured a lot of interest and discussion. The webinars were followed by an average of 25-35 young professionals and activists.

Other Project activities include generation of articles that inform the readers by analysing local, regional and European dynamics in the EU accession and integration processes, which will aim at introducing readers with innovations and innovative perspectives. They will be available to professionals, institutions and the public to ensure an all-inclusive understanding of and a more efficient approach to negotiations.

“The Importance of Justice Reform to EU Negotiations” http://www.eupolicyhub.eu/rendesia-e-reformes-ne-drejtesi-ne-negociatat-me-be-ne-nje-takim-me-znj-fjoralba-caka-zv-ministre-e-drejtesise/?fbclid=IëAR10T5ËefdAUN2dEuRUQFGc1ë7DoRXSRgjVQkKJNsO4CË-uexqeHGJBqhnc

“Negotiations, Problems and the Albanian Approach”

“Challenges of the Albanian Manufacturing Industry during the Integration Process”